Coronavirus: Our response and how we can help Close
Menu 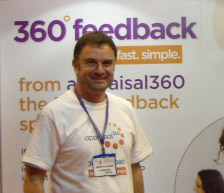 Richard is the founder and owner of Appraisal360. It was during his career as a Chartered Engineer in the telecommunications industry that he had his first experience of 360 degree feedback and was an instant convert. He decided to bring together his experience of designing and operating online information systems with his interest in leadership and personal development. And so Appraisal360 was born in February 2006.

Richard strives to make the world a better place – and with Appraisal360 he hopes to make people’s working lives that little bit more fulfilling and rewarding.

He believes passionately that tools are there to do a job, and not the other way around, so simplicity, clarity, flexibility and robustness have been built in from day one.

Services to clients include overall project leadership, management of training and development and feedback facilitation for client organisations and private client coaching.

Lynda is responsible for the training and development of our Practitioner Network, areas include project management, 360° feedback facilitation and identifying organisational learning.

Lynda is an expert in supporting coaches & trainers to develop their business using 360 feedback and following the success of her latest book ‘Get Out Of Your Own Way’ offers a range of development programmes and mastermind groups to ensure the best coaches & facilitators are working with Appraisal360.

Lynda has a professional background in the NHS before chasing her more entrepreneurial dreams of owning her own development business. In 2001 she set up a consultancy company working in the healthcare sector initially with the NHS and then with public & private healthcare organisations as far away as New Zealand. In 2007 she launched Health Service 360 on the Appraisal360 Platform and has subsequently supported industry specialist to create other specific 360° feedback products such as Lawyer360

“I had my first 360 in 1999 when I was an NHS leader, the thought of it was a little daunting to start with, and I was careful to get the most out of by choosing people whose opinions I genuinely respected. The feedback was amazing really powerful, these people really knew me, they told me some of the things I already knew I did well, they thought I was weaker in the areas I kind of expected, but best of all gave me some really motivating feedback about how I could improve, what they’d like to see me do more of etc. This first 360° feedback really shifted my thinking, got me out of a bit of a rut and definitely contributed to what I do today. I knew this would be one of the key tools I’d use for helping other people find their mojo! ”

Tom has over 15 years experience developing software and web applications, and is passionate about delivering simple but effective software.

After graduating with a degree in computer science, Tom worked with a variety of medium and large companies across the UK and US on large-scale database applications.

Tom joined us in 2007 and has since been responsible for developing the Appraisal 360 application and administering our servers.

Get started - it's easy!

Not ready yet? Order a free info pack